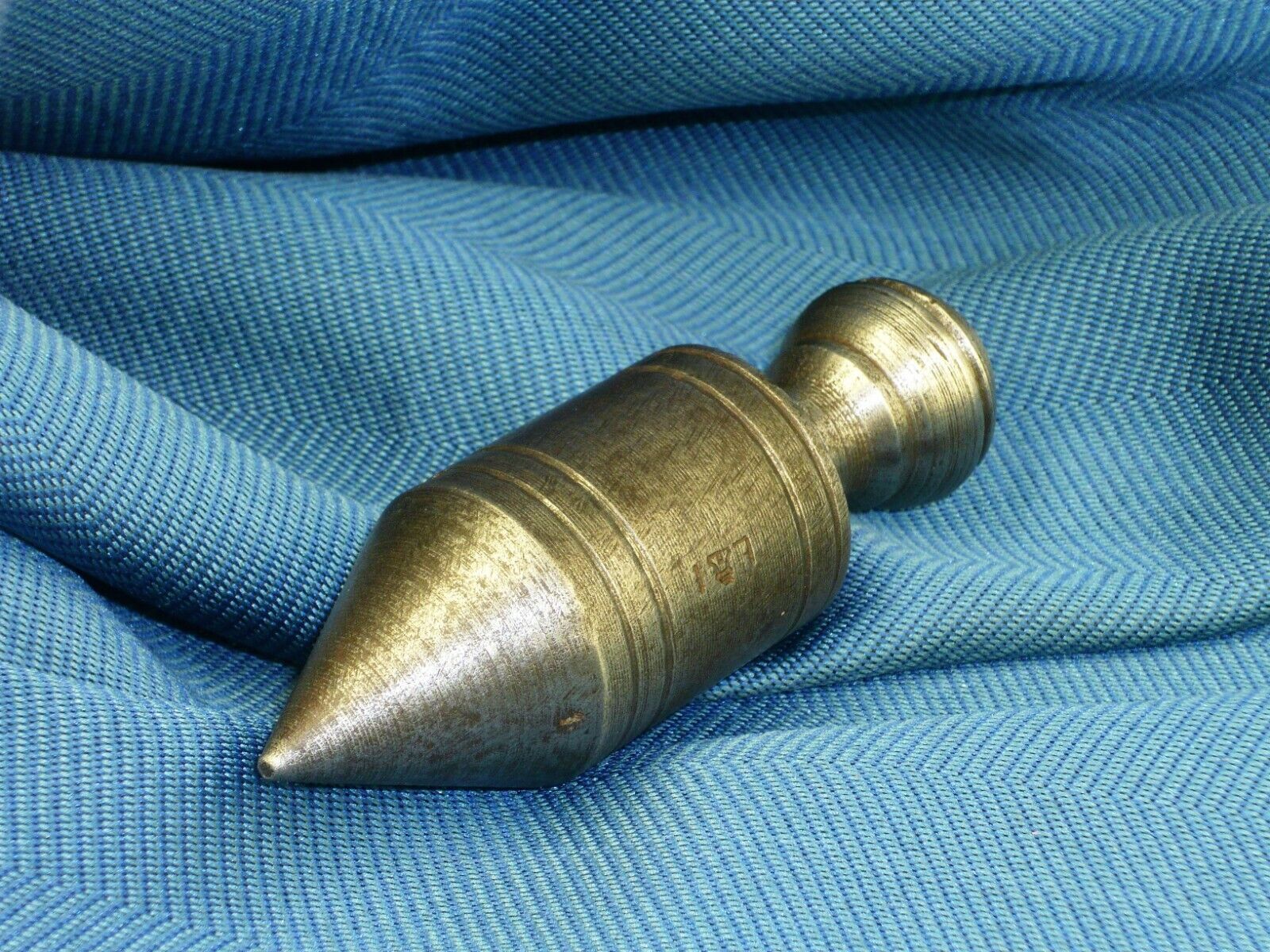 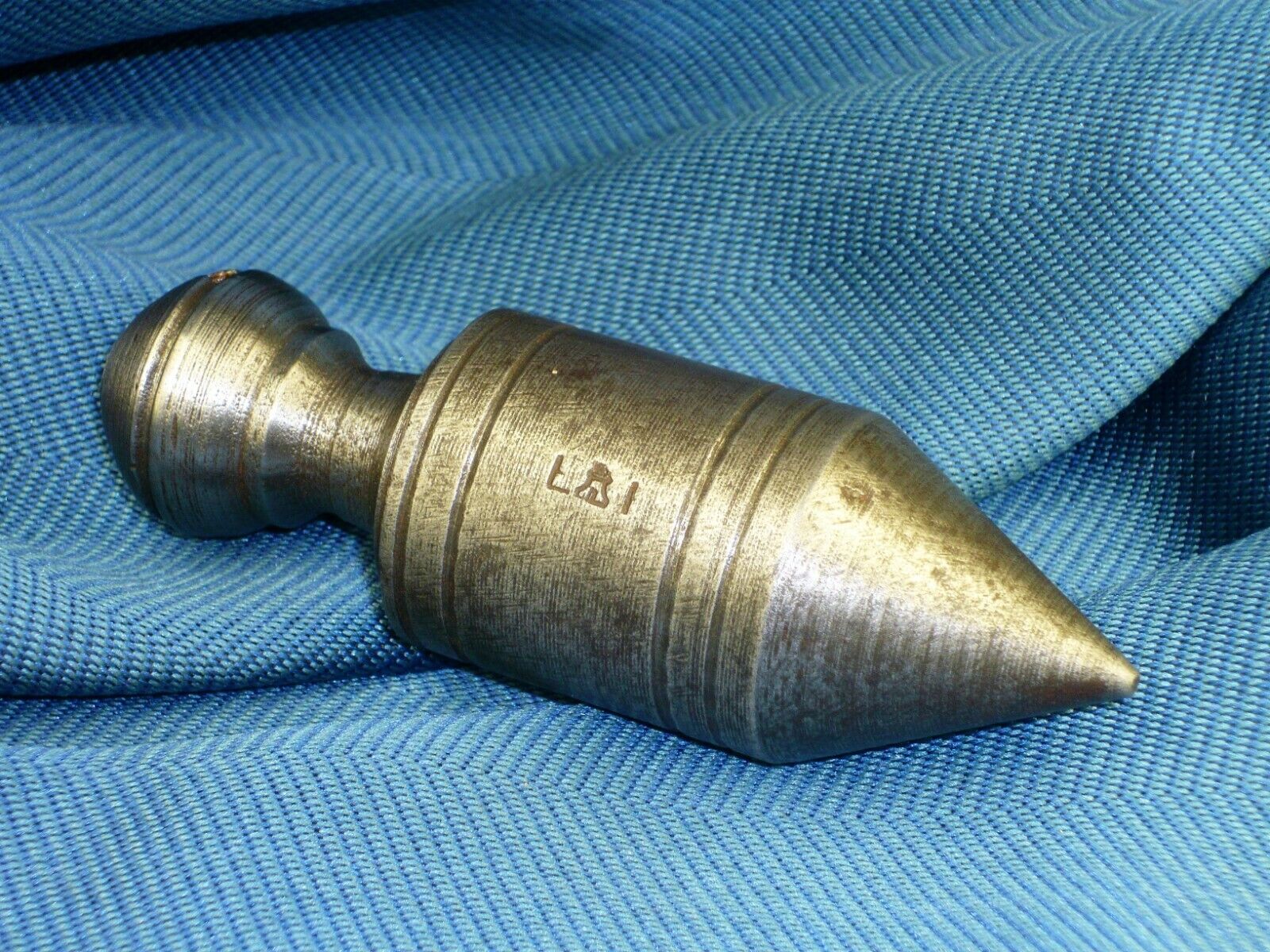 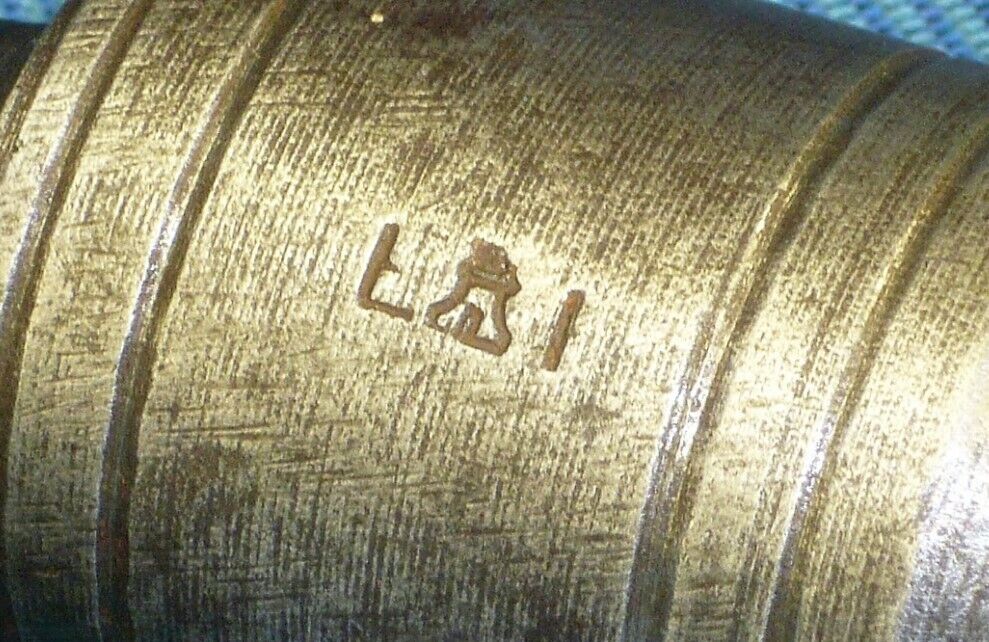 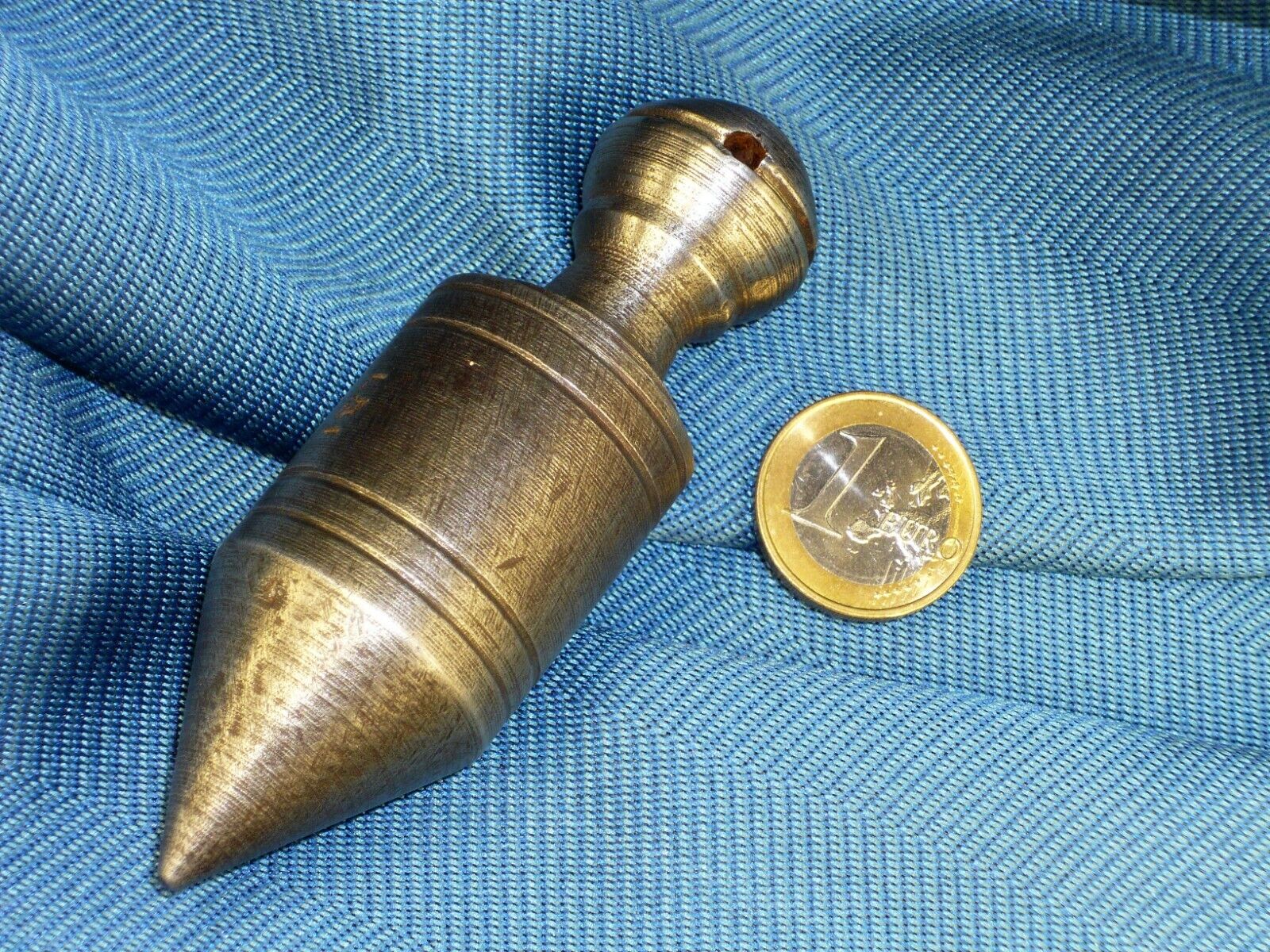 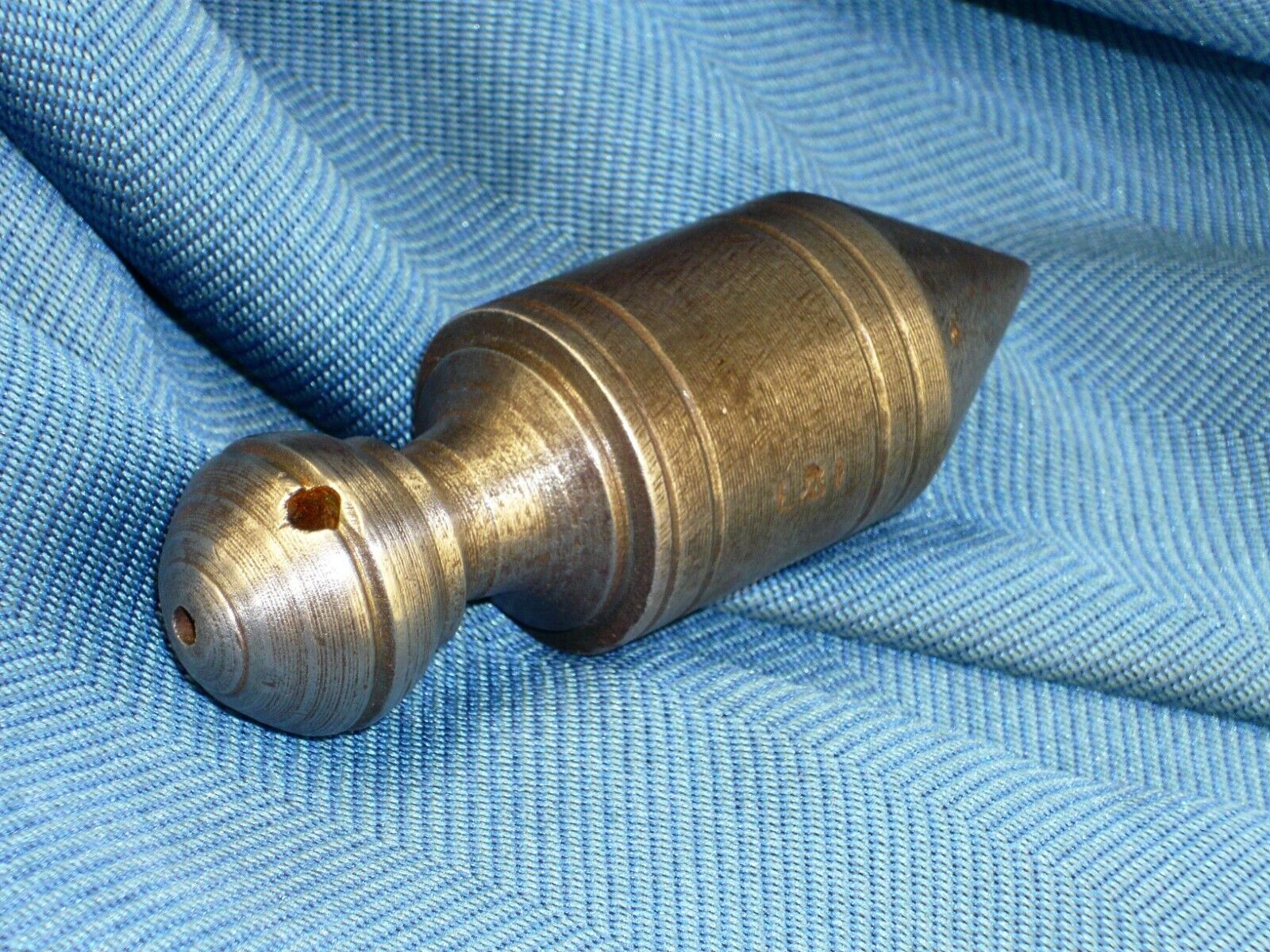 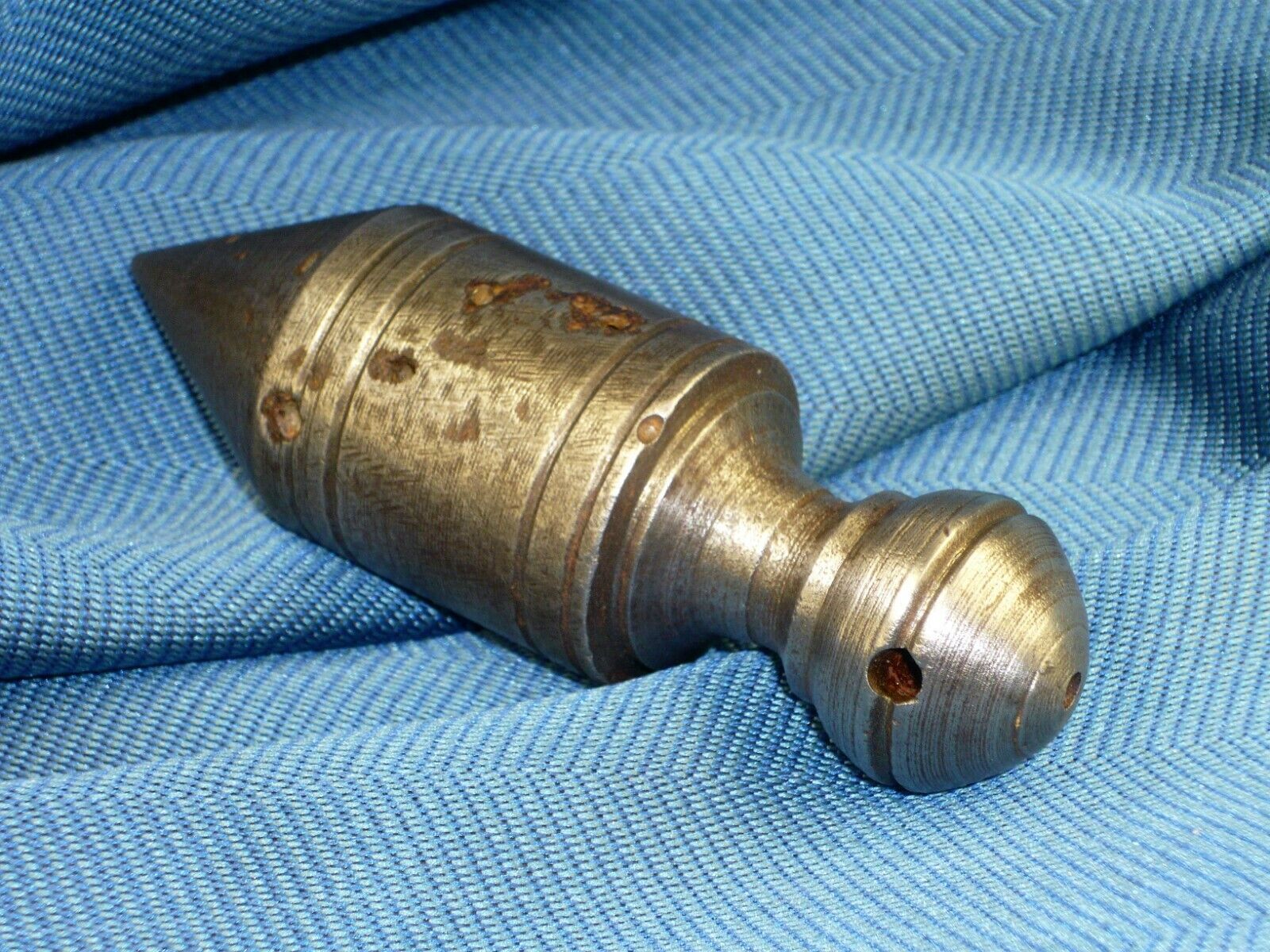 PLOMB BOB DATA. ENGLISHTitle/Object: Plumb bob for Construction WITHOUT Nut. 19TH CENTURY.Use: Construction.Type: Normal: Cone cylinderPeriod: First half of the 19th centuryManufacturer: Unknown.Material: IronConservation: Regular.Measurements Weight: Height: 9,8 cm.                         Diameter: 3,2 cm.Total Weight: 305 gr.Description:- Incomplete plumb bob for the construction of the first half of the 19th century, with a solid iron weight, 9.8 cm. high, 3.2 cm. in diameter and weighing 305 gr.- The iron weight has a fixed head. The body of the weight is cylindrical and conical. The quality of the cast iron is poor, as opposed to the good quality of the execution of the Weight made by turning.- One of the faces of the Body of the Weight has three Marks: The first is what appears to be the letter "L" with a tiny horizontal wedge halfway up; the second could be a small castle or the decorated letter "A"; and finally what could be the letter "I".- The located badges are made with a punch with the die on its tip. We have not found any data on the Badges that could provide us with information.- The fact that a plumb bob has some distinctive feature, mark or contrast, different from its size number, is a very scarce detail and of great importance for the interest of the plumb bob.- A very good and beautiful patina is preserved throughout the plumb bob.- Probably the Plumb bob is made in the south of Europe.Conservation and damages:- The foundry has various cokes on the side of the cylinder.- The Plumb bob is in a good state of conservation, having many, but very small blows and rubbing, both on the edges and faces.Comments:- Both the measurements and the weight are approximate.- Very interesting as a collector's item and as a decorative element.- Because it is inevitable the differences of tonalities between photos and reality, you must have in mind that the tones of the colours of the photos are not exactly equal to the tones of the real colours.- The Plumb bob on sale is the one corresponding to the photos, which in turn are complemented in this Description, with the aim of providing a better knowledge of the Object, and never being a detailed exhibition of it.- The data provided here are not contrasted personal opinions.  DELIVERIES ARE MADE ON MONDAYS.